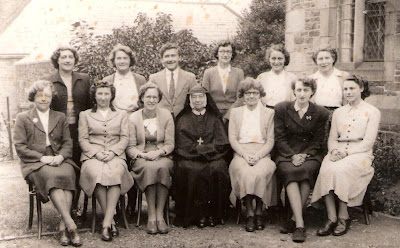 This staff photo was taken to mark the centenary of the Cathedral School in 1951. On the back row (left to right): Monica Smith, Gertrude Sowerby, Edward Whitehouse, Mary Wearden, Mary Fox, Teresa Verity; front row (left to right): Elizabeth Troughton, Dorothy Parker, Marjorie Turner, Mother Mary Agatha, Clare Troughton, Margaret Wray, Rose Brighouse. A booklet produced for the centenary gives an account of an event held on 17th February 1851 to celebrate the opening of the school: "The health of the Queen [Victoria] was proposed, there was a toast to 'our most Holy Father Pius 9th' and the toast of the evening 'Success to the new Catholic Schools.' The Catholics of Lancaster were congratulated on having built such schools, which were to be the nursery of the true religion, the religion of charity and love. The celebrations that day ended with 'God save the Queen'." It was the following day - 18th February 1851 - that the opening of the school, as recorded by Canon Billington (see here) took place.

Posted by Canon Billington at 7:19 am