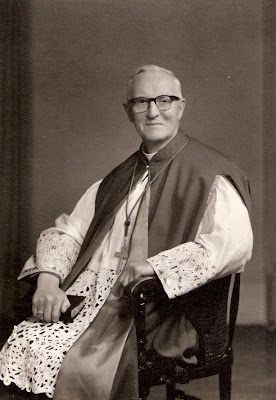 Monsignor Provost Richard Oswald Brimley, a priest who served at the Cathedral for more than half his life, died on this day in 1982. Born at Longton just outside of Preston on 5th August 1895, he was ordained to the priesthood by Archbishop Keating on 3rd June 1923. Ten days later he came to St Peter's, Lancaster, where he remained for 52 years. During that time he saw - and was involved with - some major changes and great events in the church's history. Within two years of his arrival the Diocese of Lancaster was founded and St Peter's became the Cathedral; Fr Brimley acted as secretary to the first Bishop for a time. In 1935 he became Administrator of the Cathedral, a post he held until retirement in 1975. During that time he oversaw the foundation of two new parishes: St Thomas More's (1937) and St Bernadette's (1958). He was also involved in the foundation of Our Lady's High School in Lancaster and the Lancaster University Chaplaincy Centre. In 1971 he became Provost of the Cathedral Chapter. Outside of the Church he was greatly admired in the city of Lancaster, where he served for many years as - amongst other things - a city councillor and as a member of the governing committee of the Royal Lancaster Infirmary. He was awarded the Honorary Freedom of the City of Lancaster in 1971. With many changes to the liturgical life of the Church during his time, Monsignor Brimley oversaw the early reorderings of the Cathedral, before a more permanent solution to the changes was found in 1995. His requiem Mass was celebrated in the Cathedral by Bishop Foley, and he was laid to rest in the Cathedral cemetery.
Posted by Canon Billington at 6:53 am