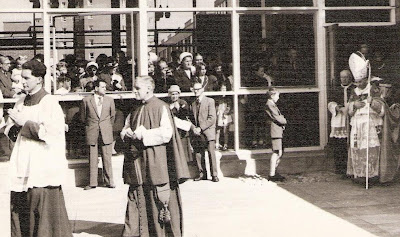 45 years ago today the new Catholic High School for Lancaster was blessed and opened. Although it is outside of the Cathedral parish (it falls within the boundaries of St Joseph's, Skerton) it has many connections with St Peter's: many children from this parish have attended the school, it replaced some of the earlier school provision on the Cathedral site and Monsignor Brimley, at that time Administrator of the Cathedral, was influential in its establishment. 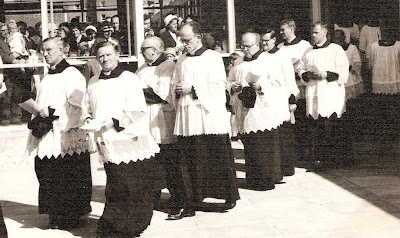 The new school, dedicated to Our Lady, clearly attracted a large number of clergy at its opening. A fair number of people can also be seen inside the new building. 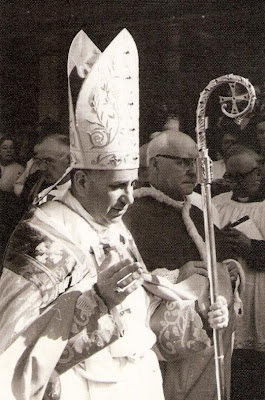 Our Lady's was blessed by the Apostolic Delegate to Great Britain, Archbishop Igino Cardinale. He later went on to be Papal Nuncio to Belgium, Luxembourg and the European Union. Sadly - given his name - he was never made a cardinal; he died in 1983. 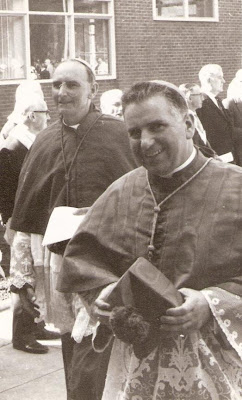 Here Archbishop Cardinale is seen with the Bishop of Lancaster, Rt Rev. Brian Foley. It is a sign of the significance of this event that the Apostolic Delegate agreed to come for the blessing. 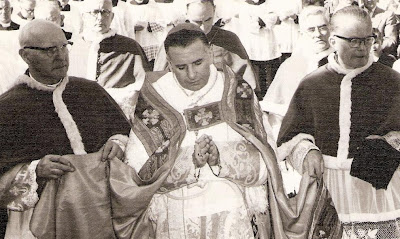 Clearly members of the Cathedral Chapter were present, and here the Archbishop is assisted by two canons. The cope he is wearing belongs to the Cathedral; it is part of a set of vestments purchased for the centenary of the church in 1959. 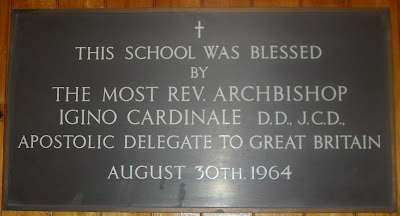 To this day a plaque in the school (which is now known as Our Lady's Catholic College) marks the event. Our thanks are due to Mr J. Burscough for assisting us with this post.
Posted by Canon Billington at 7:41 am