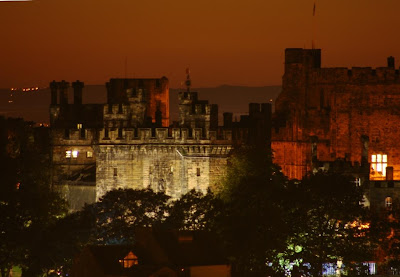 After the death of the last of Lancaster's Catholic martyrs in 1646, it became at least a little safer for Catholics to practise their faith. Lancaster Castle (pictured), for so long a place of imprisonment for Catholics, became a little less threatening. Canon Billington's narrative speaks of "a brief interval of religious liberty both for Catholics and Protestant Dissenters" during the reign of King James II (1685-1688). He reprints some short extracts from a diary written by Thomas Cartwright, the Bishop of Chester, who visited Lancaster "at assize time, when one of the judges was Catholic". An entry for 12th August 1687 records, "I went with Judge Powell, a colleague of Allibone, to the [parish] church. Sir Richard Allibone and the Catholics went at the same time to the school house, where they had mass and a sermon." Allibone, the judge referred to, had a brother who was a priest. Canon Billington notes that "During this assize (August 16 1687) the Corporation of Lancaster enrolled both the judges among their freemen; also Sir William Gerard, Sir Thomas Clifton and a few other Catholic gentlemen." It would be another 140 years before Catholic Emancipation in 1829 gave a fuller degree of freedom to Catholics, but perhaps these entries record the first signs of a new dawn for Catholic freedom. It is interesting to note that the list of priests who have been resident in Lancaster begins at about this time: the plaque in the Cathedral displays a list dating from 1678.
Posted by Canon Billington at 7:18 am