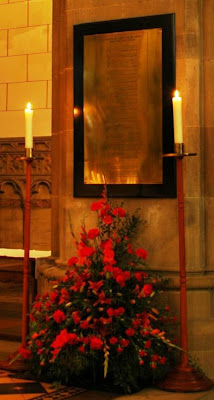 The day after Edmund Arrowsmith's martyrdom another Lancaster martyr went to his death. Richard Hurst (or Hayhurst) was a farmer from Preston. His story is a little unusual, as Canon Billington relates: "Hurst's arrest had been ordered as a convicted recusant, and one of the pursuivants in attempting it received a blow on the head, and also broke his leg; he died, and Hurst was charged with murder, conticted contrary to justice, and executed. His real offence was his religion, and his life was promised him if he would take the oath." On the way to his execution he was met by Mr King, the vicar of Lancaster, and was asked about his faith. He replied, "I believe according to the faith of the holy Catholic Church." Canon Billington gives us the following details of his death: "He kissed the gallows on reaching the place of execution, and disregarding the ministers present, recommended himself to God, and begged the prayers of the Blessed Virgin, his angel guardian, and all the saints, especially St. John the Baptist, it being the day of his decollation. Ascending the ladder, he repeated the names of Jesus and Mary, and so was put to death."

Posted by Canon Billington at 6:31 am