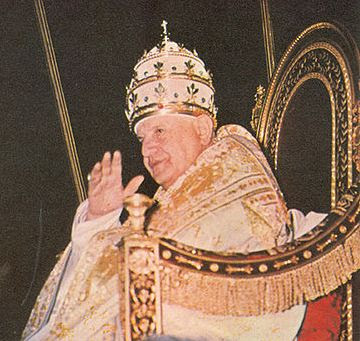 On this day in 1963 Pope John XXIII died. The Second Vatican Council, which he had called, was only a few months old but already it was clear that great change was in the air. John XIII was elected as Pope in October 1958; Benediction was given and the Te Deum sung at the Cathedral in thanksgiving for the new Pope. He was in his late seventies when elected, and few thought that he would make much of a long-term difference to the Church. As it turned out, he set in motion a process of radical reform which many welcomed and many found painful. His death was marked at the Cathedral with a requiem Mass, as the notice book entry for 9th June 1963 records: "On Monday at 7:30pm the Bishop will sing Requiem Mass for Pope John. We ask you to attend and to receive Holy Communion, which will be given after Mass." The Pope's body lies in St Peter's Basilica in the Vatican, and he was beatified on 3rd September 2000.

Posted by Canon Billington at 6:59 am