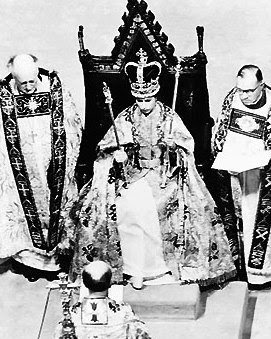 57 years ago today Elizabeth II became Queen of England upon the death of her father, King George VI. Her coronation took place almost exactly one year later, on 2nd June 1953. It was an event that caused great excitement - not least because, for many, it was a first chance to watch an event on television. Before the reforms of the Second Vatican Council a prayer for the monarch was offered at the end of every High Mass. Back in 1953 Cathedral parishioners were also being encouraged to offer prayers for the Queen on the eve of Coronation Day, as the notice book entry for 31 May 1953 records: "Monday at 8pm - the Bishop will sing Pontifical High Mass to beg God's blessing on Queen and Country. You are expected to attend and receive Holy Communion, given after Mass. No solid food after 5pm; no drinks after 7pm." The final sentence is included to remind parishioners of the requirement to fast before receiving Holy Communion.
Posted by Canon Billington at 7:16 am