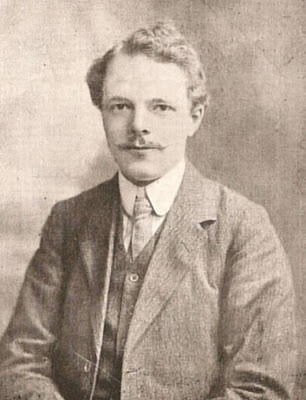 A young James Hugh Reginald Dixon took up his appointment at St Peter's, Lancaster on this day in 1909. He was born at Flaxton near York in 1886 and had excelled in musical studies, gaining his FRCO (Fellowship of the Royal College of Organists) in 1904. At Christmas 1908 he converted to Catholicism at St Wilfrid's in York, crossing the Pennines to make his home here early in the following year. 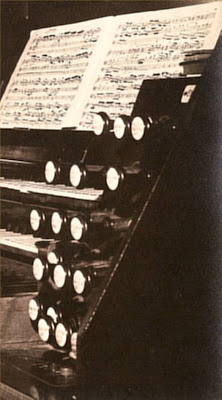 Imagine life at St Peter's at the time: Canon Billington was rector and it was the church's golden jubilee year. Much was being done to celebrate the anniversary, including the installation of Sir Giles Gilbert Scott's new altar and triptych. This is how the organ console appeared at the time. 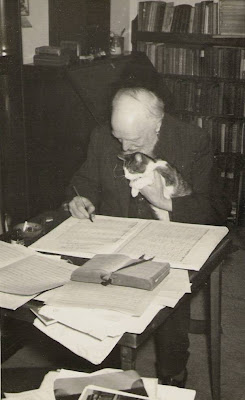 For over 60 years he gave distinguished service to St Peter's, also taking a very active role in the musical life of the Diocese of Lancaster after its foundation in 1924. In 1956 he was awarded the distinguished papal honour the Cross Pro Ecclesia et Pontifice by Pope Pius XII. Aside from his brilliance as a musician he was an extraordinary character, a man with a mischievous sense of humour and a passion for inventing. He also loved cats, as the above picture suggests! 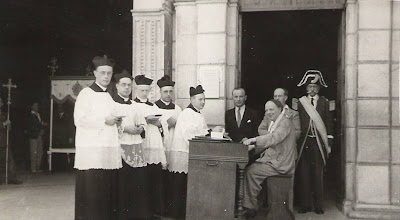 On travels as well as in Lancaster he always had a role to play in providing music. During the first World War he served in Lyon and formed a male voice choir and a small orchestra. His numerous compositions included numerous Masses, motets and countless organ works. He composed a setting of Cardinal Newman's Dream of Gerontius (dramatised by Fr Lockwood of St Joseph's, Lancaster). Perhaps his most important work is his oratorio Panis Vitae, which was written by invitation for the Eucharistic Congress in Munich in 1960. It was later performed in Westminster and here in Lancaster. 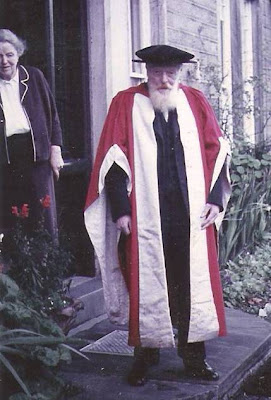 In his later years he lived with his sister Beatrice, seen here at the edge of this picture in which Dr Dixon is seen in his doctoral robes. As a tribute to her he composed a Mass of St Beatrice, which has recently been revived in the Cathedral and sung by our junior choristers at Mass. With his declining health he retired in 1971 and died on 3rd May 1975. His obituary in the Lancaster Diocesan Directory 1976 ends with the following paragraph: "Dr. Dixon was a man of great charm, always courteous and respectful. In later years a copious beard added to his distinguished appearance. He was always happy in the Cathedral company, and his puckish humour made him a delightful companion. He did great service both for the Cathedral and the diocese. May he rest in peace." We gratefully acknowledge the help of Dr Dixon's former student and biographer, Joan Johnson, in producing this post.
Posted by Canon Billington at 7:05 am