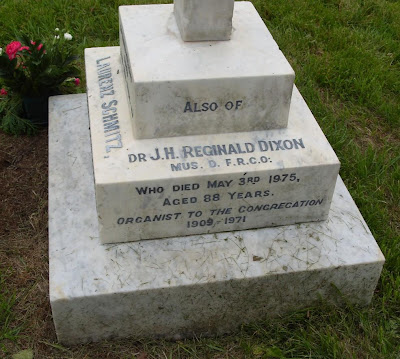 34 years ago today Dr J. H. Reginald Dixon, who for 62 years had overseen music at St Peter's, died at the age of 88. During May on Billington's Blog we will have the opportunity to discover more about the life and character of this extraordinary man, and we will mark the 100th anniversary of his appointment here. The notice book from 4th May 1975 gives details of his funeral: "Dr Dixon's body will be received into the Cathedral on Tuesday evening at 7.0pm followed by Mass. The Requiem will be on Wednesday at 10.0am and the Bishop will be present. The funeral will be in the Cathedral cemetery." Dr Dixon was buried in the same grave as Laurenz Schmitz, who had been organist at Dalton Square from 1855, moving to the new church when it was opened and serving here until 1894. He died in January 1909, less than four months before Dr Dixon took up the role.
Posted by Canon Billington at 7:36 am