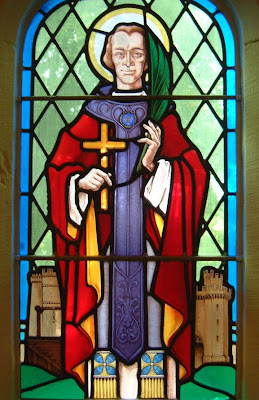 This window can be found in the entrance to the Cathedral, and depicts St Edmund Arrowsmith, one of two canonised Lancaster Martyrs. Lancaster Castle, where he was imprisoned, can be seen behind him, while in his hands he bears a cross and a palm, the symbol of the martyr's victory over death. The window was blessed on this day in 2002, having been paid for by an anonymous donor. It is the cover image for the 2009 national Catholic Directory for England and Wales.

Posted by Canon Billington at 7:51 am