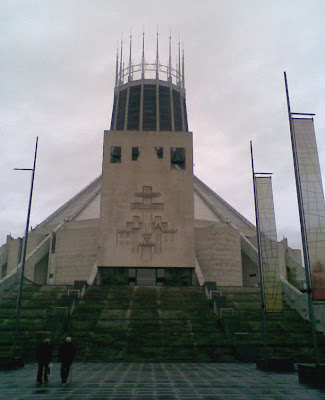 The Metropolitan Cathedral of Christ the King, Liverpool, was consecrated on this day in 1967. Until our own Diocese was founded in 1924 Lancaster was part of the Liverpool Diocese; still today Lancaster remains in the Province of Liverpool, which consists of seven diocese and in which the Archbishop acts as figurehead. It is perhaps ironic that the Lancaster Diocese had a cathedral from the moment of its creation while its 'mother diocese', Liverpool, had to wait 117 years until a permanent cathedral was opened. The present Archbishop - Most Rev. Patrick Kelly - was a Lancaster Diocese priest and served at Lancaster Cathedral for a couple of years early in his priesthood.

Posted by Canon Billington at 7:11 am