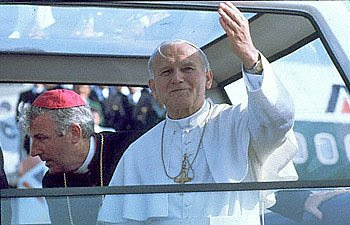 On this day in 1982 Pope John Paul II came to Britain, beginning the only visit ever made to this land. The six-day visit almost never took place: Britain was at war with Argentina and it was considered that a papal visit to Britain may be too politically sensitive. The cancellation of the visit was narrowly avoided, but as a result of the conflict a planned visit to Downing Street was omitted from the schedule. 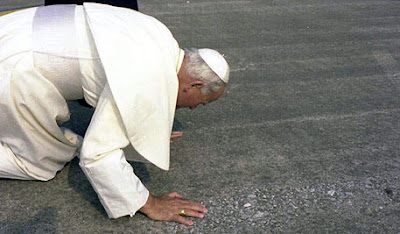 The Pope landed at Gatwick Airport, which is located in the Diocese of Arundel and Brighton; there he was met by the local Bishop, a certain Cormac Murphy-O'Connor (who can be seen in the Popemobile in the top photo). Seemingly from that time forward Pope John Paul used to refer to the future cardinal as "the Bishop of Gatwick". As had become his custom, he kissed the ground as he came off the plane.

The Pope made two visits to the North West. In Liverpool around a million people lined his route from the airport to the city centre. He celebrated Mass at the Cathedral (pictured) and also heard confessions there. The visit was centred on the sacraments, and in seven locations the seven sacraments were celebrated by His Holiness. At Manchester he ordained twelve priests at a massive open-air Mass at Heaton Park; around 200,000 people attended. 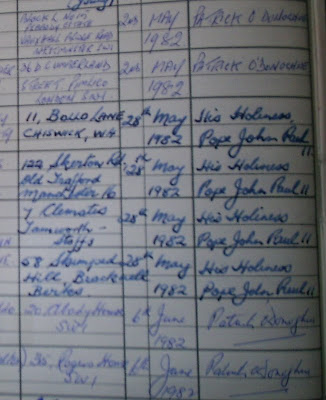 At Westminster Cathedral the Pope celebrated the sacrament of Baptism. The picture here is an extract from the baptism register at the Cathedral, and the name of the officiating minister is seen in the right hand column. The name of Pope John Paul is seen in the central entries, but look whose name is above and below - the future Bishop of Lancaster was sub-administrator of Westminster at the time, and had a major part to play in planning for the Pope's visit there. There is more about the Pope's visit to Britain on a special website: click here. The former blog of Westminster Cathedral also has a feature on the visit; click here and scroll down to take a look.

Posted by Canon Billington at 8:01 am