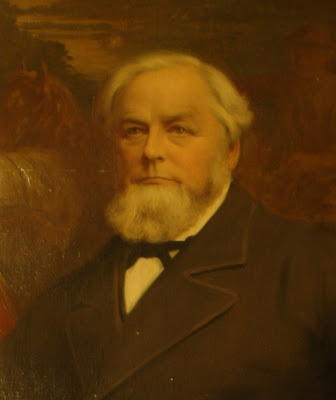 This is a portrait of Alderman Thomas Preston, who died on this day in 1894. The painting hangs in Lancaster Town Hall. Thomas Preston was the treasurer on the committee which oversaw the building of St Peter's, and he was a generous benefactor of local churches; Billington records that he gave £100 towards the building of St Mary's in Morecambe. He was also the first Catholic to be elected Mayor of Lancaster after the Reformation, as Canon Billington states: "It was in 1875 that he was first elected to the chair, but Protestant feeling in the town was so bitter at the time that it was considered injudicious for him to pay a state visit to St. Peter's. At his second term, in 1889, no opposition was raised, and an official visit was therefore made. His nephew, Alderman Robert Preston, elected mayor in 1894, 1899, and 1900, also visited the church in state." Robert Preston had two brothers who went on to be priests: Joseph and Richard, who went on to be an auxiliary bishop in the Diocese of Hexham and Newcastle.