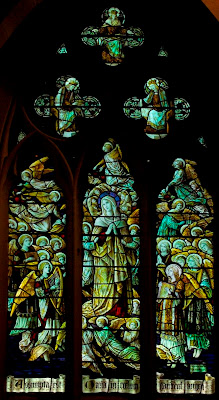 Today is the anniversary of the death of Mary Smith, in whose memory the Assumption window at the west end of the Cathedral was given. Canon Billington: "The south aisle has its west window filled with glass, the work of Shrigley and Hunt, representing our Lady's Assumption. She is mounting up to heaven surrounded by a multitude of rejoicing angels. The inscription is from the antiphons of the feast: 'Assumpta est Maria in caelum; gaudent angeli' [Mary is assumed into heaven; the angels rejoice]. Underneath is a brass plate recording that 'This window was given by Richard Smith in memory of his wife Mary, who died 18 April, 1890. R.I.P.' Mr Smith, who gave the window in 1904, himself died in 1907. Both are buried in St. Peter's Cemetery." A footnote in Billington's parish history records that the window cost £300.

Posted by Canon Billington at 7:29 am