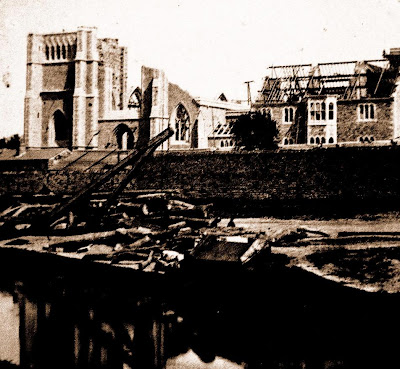 152 years ago today the foundation stone of the new St Peter's church was blessed. Sadly no one has been able to track down any marked stone on the current building; the reason for this remains a mystery. Here is Canon Billington's account of the day: "The foundation-stone was blessed with the usual ceremonial on April 29, 1857, br Dr. Alexander Goss, then Bishop of Liverpool, Bishop Brown, who would have taken a special interest in it, having died in the year before. The bishop was attened by Canon Fisher and Provost Croskell as deacon and subdeacon, and many of the North Lancashire clergy assembled round them. There was a large attendance of laymen also, and the ceremony, then an unusual one in the district, was conducted with decorum and edification, as Dean Brown was glad to record. The police force offered its services to keep order, but had little beyond routine work to perform, the behaviour of the people being reverent. There was a luncheon afterwards, and in the evening the police and the workmen had a supper provided for them." The involvement of the police is a sign of the hostility that there was to the building of a new Catholic church at the time. Less than 30 years after the Catholic Emancipation Act, feelings in Lancaster were still running high. Canon Billington also notes, "It was currently stated that one of the best builders in the town had been asked to undertake the mason's work at his own estimate, but being a zealous Protestant, declined to do so solely on religious grounds." A footnote records that the same man later did some work on the church. 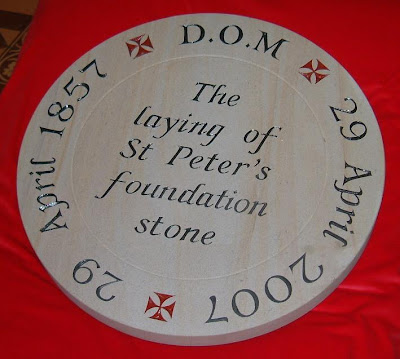 In 2007 a memorial stone was produced to mark the 150th anniversary of the blessing of the foundation stone. The occasion began the build-up to the 2009 celebrations.

Posted by Canon Billington at 7:36 am