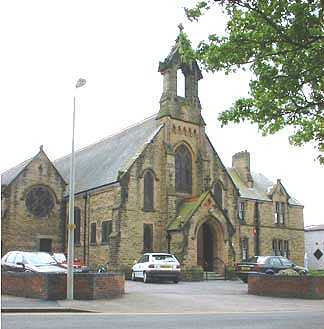 Over the years St Peter's has played a significant role in establishing new parishes in and around Lancaster. Canon Billington writes, "The growth of Morecambe, both as a place of permanent residence and as a summer resort, demanded the attention of the clergy of St. Peter's. Jeremiah Parkinson of Bare, who died in 1880, and his wife Margaret, who died in 1888, left £2356 for establishing a church at Morecambe; this was used for purchasing the land, and by July 1891 a little over £816 was in hand for a church. Provost Walker, Mr. William Smith, Miss Coulston, Alderman T. Preston, and Mr. John Leeming each gave £100 to it, and other gifts were added; but the chief assistance came from £1000 offered in December 1891 by Miss Helena Leeming on her profession as a Carmelite at Lanherne". The foundation stone of St Mary's was laid on this day in 1895, and the church opened on December 12th in the same year. Canon Billington gives a description of the building and notes that it was served from Lancaster for only a short time; its first resident priest, Rev. John Smith, was appointed in 1896 and established a school soon after. Writing less than 15 years after the church opened, Canon Billington obviously did not feel the need to give many further details of its history, but adds, "The history of the place has been uneventful."

Posted by Canon Billington at 7:12 am