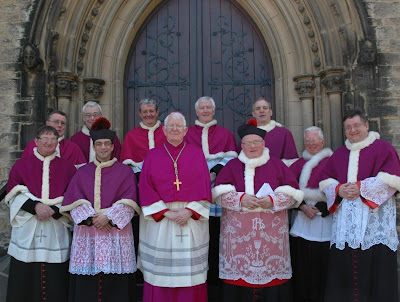 One of the most modern photographs we have featured on Billington's Blog, this image shows the Cathedral Chapter in May 2009. The Chapter (members of which are known as 'Canons') has some responsibility for overseeing the running of the Cathedral, and - when the diocese is a vacant see - for electing an Administrator who runs the diocese until a new bishop is appointed. The Diocese of Lancaster was founded in November 1924 (more on that later), and to mark the anniversary we will feature some old pictures of the Chapter throughout this month of November. In the meantime, you can find out more about the Chapter in an earlier post about the installation of the first canons, here.

Posted by Canon Billington at 7:32 am