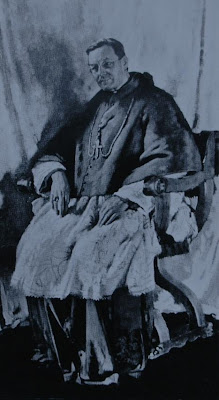 Archbishop Thomas Whiteside, whom we met earlier in the year, visited St Peter's on this day in 1894. Just a few months after his episcopal consecration, it was his first official visit to his home parish since becoming Bishop of Liverpool. Canon Billington's account of the visit tells us, "On his first official visit to Lancaster he pontificated at St. Peter's on November 18, Mr. Robert Preston, the mayor, attending the church in state, and his brother, Dr. Richard Preston, preaching on the text, 'Render unto Caesar the things that are Caesar's, and unto God the things that are God's.' On the following evening there was a public reception of the bishop, when addresses of congratulation were presented by the Catholics of Lancaster and the schoolchildren." The local press reported that an estimated 2000 people attended the Mass sung by the Bishop.

Posted by Canon Billington at 7:00 am