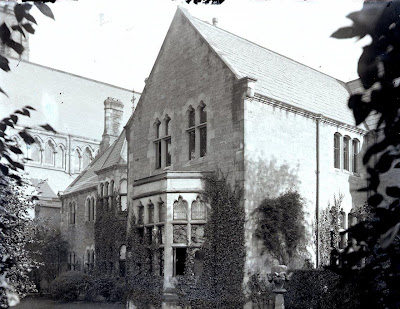 Canon Billington's history includes a little section on the presbytery, which is now known as 'Cathedral House'. He writes: "A priests' house adjoining the church and connected internally with it was part of Dean Brown's plan, and in spite of some financial difficulties the building was erected, forming three sides of a little court, the other side being the wall of the church... in 1895-6 the house was extended by adding a large bay to the south, from the designs of Austin and Paley. The cost of this extension, including furnishing, was greater than that of the original house, reaching to more than £3000, for in the forty years' interval there had been a great alteration in prices and in the conditions of labour." The extension mentioned is the part of the house nearest the camera in the above image, which appears to date from sometime in the early part of the 20th century. Part of the upper floor of this extension was used as a Chapter room after the Diocese of Lancaster was founded in 1924, though the whole area later reverted to providing accommodation for the priests serving the parish.

Posted by Canon Billington at 6:48 am