1924: The new Diocese of Lancaster 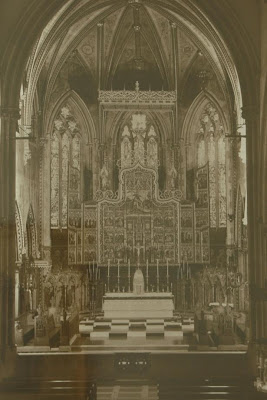 85 years ago today Pope Pius XI signed a decree, Universalis Ecclesiae Sollicitudo, creating the new Diocese of Lancaster and raising St Peter's Church to cathedral status. It was a few days later, on 3rd December, that Archbishop Keating of Liverpool received notification of the decree. By all accounts he was surprised at the decision, and seemingly somewhat angry: not only had the decree been issued without his knowledge, it also made his great project - the building of a cathedral for Liverpool - somewhat more difficult. The image above shows the 'new' Lancaster Cathedral soon after the creation of the Diocese. 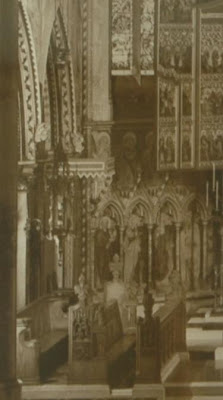 A close-up of the image shows a canopy about half-way up the picture, attached to the arches on the left-hand side. This is a temporary arrangement put in place to highlight the cathedra (bishop's throne) which was placed beneath it. Later, in 1928, a permanent cathedra was installed and the canopy removed. The new Diocese of Lancaster was formed from the northern part of the Liverpool Archdiocese (from which were taken 46 parishes, 67,647 Catholics and 91 priests), and from the western part of the Diocese of Hexham and Newcastle (from which a further 18 parishes, 21,098 Catholics and 32 priests were taken). From the date of the decree 85 years ago there must have been some fairly frantic activity to prepare for the installation of the first chapter and the consecration of the first Bishop of Lancaster, in February 1925.

Posted by Canon Billington at 6:15 am