1995: Married amidst the scaffold 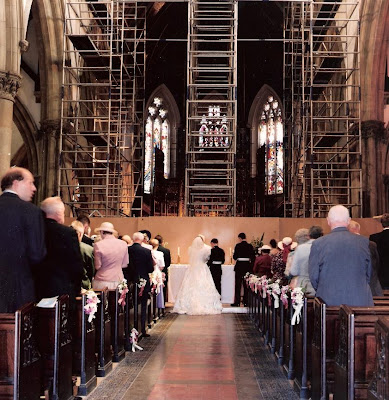 Between June and August in any given year the Cathedral hosts a number of weddings. If you were getting married here in 1995, however, it was a slightly less beautiful place to make your vows. In the final few months of the reordering, the sanctuary is filled with scaffolding, presumably to assist with the installation of the corona which now hangs above the altar. Behind we can see that the Giles Gilbert Scott triptych has already been restored to its original position. Less than three months after this picture was taken the work was completed and the Cathedral rededicated.

Posted by Canon Billington at 8:43 am