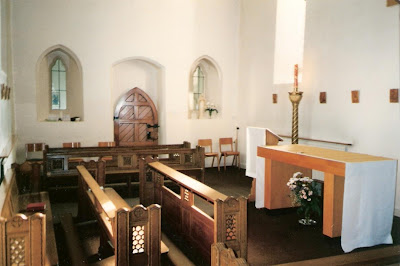 In time the convent chapel became - sometime in the 1960s - a space for young children to attend Mass with their parents, without the problem of noise disturbing other parishioners. This 'crying room' was already clearly established in 1965, as the notice book for 20 June that year records: "May we remind parents who bring their little one to Mass of the privilege to attend Sunday Mass in the convent chapel – entrance Balmoral Road. This would avoid any embarrassment both to the parents and other people in church. We are pleased to see the parents and little ones at evening Mass on Sundays." Later the chapel began to be used for the Cathedral parish weekday Mass. These pictures show the chapel at one point in its history, clearly set up to be used for Mass. It's clearly Eastertide, as the Paschal Candle is present, but the exact date is unclear. 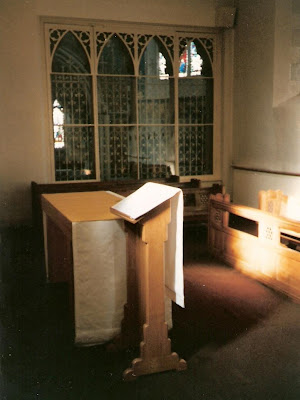 This image shows the view into the Cathedral itself. The picture clearly shows that the triptych is not restored to its original position; this was done by the summer of 1995, so we can be sure that our image is earlier than this date. It is possible that these images show the chapel set up for weekday Mass during the reordering work.

Posted by Canon Billington at 7:39 am