2001: The Installation of Bishop O'Donoghue 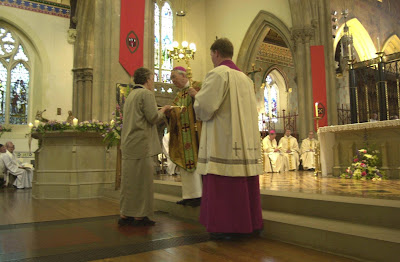 On this day in 2001 Bishop Patrick O'Donoghue - up to then an auxiliary bishop in Westminster - was installed as fifth Bishop of Lancaster at Mass in the Cathedral. The Diocese had been vacant for over a year, since the death of Bishop John Brewer on 10th June 2000. 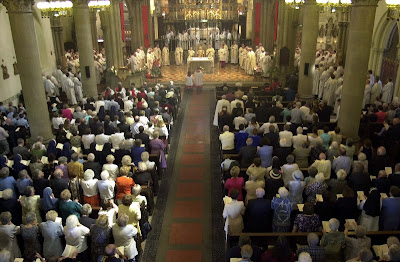 As you would expect, the Cathedral was packed full; aside from the priests people of the Diocese, there were civic and ecumenical leaders. A fair number of priests also came from Westminster to say farewell to the Bishop and see him installed in his Cathedral. 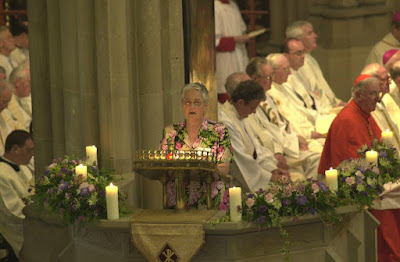 Sister Zela Procter OSU, part of the Ursuline Community at St Thomas More's, is seen here at the Ambo. Cardinal Cormac Murphy-O'Connor, the Archbishop of Westminster, can be seen behind. At the far end of the back row on the sanctuary Canon Alf Hayes, then Cathedral Administrator, is visible. He had been responsible for organising three major liturgies in eighteen months: before this celebration he had overseen the funerals of Bishop Foley (December 1999) and Bishop Brewer (June 2001).

Outside the newly-installed Bishop of Lancaster posed with the Cardinal and Archbishop Patrick Kelly of Liverpool. Bishop O'Donoghue served the Diocese for nearly eight years, before retiring on 1st May 2009.