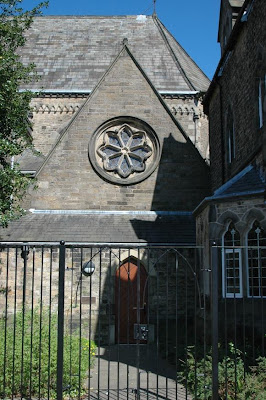 On this day in 1854 the convent chapel was opened. The Sisters of Mercy had already been in residence in the adjoining convent for over a year, but had walked daily to Dalton Square for Mass, often attracting attention from local people on account of their habits. The chapel was, Canon Billington tells us, "a gift from Mr. Gabriel Coulston, of Great John Street, and his family." It was still five years before St Peter's would be built; the picture here shows how the chapel now adjoins the Cathedral's east end. Canon Billington gives only a brief account of the chapel's appearance: "The chapel, at the western end [of the convent] is at right angles to the community block, and now looks north into the chancel of the church through a large window guarded by screen-work. The window was not made till the church was built; previously the chapel altar stood at that end. The nuns' stalls are ranged round the three other sides. On the east side are two two-light windows, and originally two others matched them on the west side; but these were closed when the church was built, and the stained glass in them was removed to the Lady Chapel. There is a small rose window [pictured above] in the south gable. The chapel is used for community prayers, the office of our Lady being recited there every day. The convent cost £1800, and the chapel £526." The reference to the windows being removed to the Lady Chapel is interesting, given that these are clearly not the windows in the Lady Chapel today. 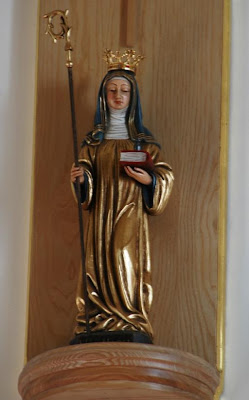 For many years the chapel was used for other purposes: as a crying room for babies at Mass and later as a weekday chapel (more on that tomorrow). A false ceiling was installed to preserve heat, though sadly this blocked the view of the rose window. In 2006 the chapel was restored and the false ceiling removed; at that time this statue of St Walburga was installed as a permenant reminder of her patronage.

Posted by Canon Billington at 7:26 am