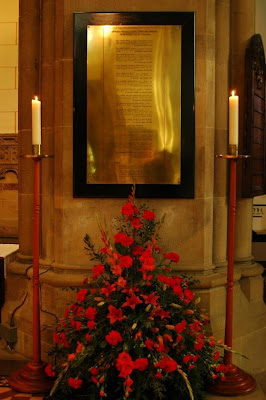 On this day in 1646 three priests were executed in Lancaster on account of their religion. After sixty years of executions they were the last to be martyred in this city, and on account of this August 7th is now kept as the feast of the Lancaster Martyrs. Canon Billington records, "The three were drawn together to the place of execution on August 7, 1646, 'the Catholics being much comforted and edified, and the Protestants astonished and confounded to see that cheerfulness and courage with which these servants of God went to meet that barbarous and ignominious death to which they were condemned." Canon Billington tells us a little about each of the men:

Blessed Edward Bamber
"Bamber was of the Fylde, and lay three years in prison before his trial, the wars preventing the regular holding of the assizes. Two fallen Catholics swore that they had seen him baptize and marry, which was considered sufficient proof of his priesthood."; "Bamber, the first to suffer, absolved a condemned felon at the place of execution"; he then suffered, in Billington's words, a "parculiarly barbarous" death.

Blessed Thomas Whitaker
"Whitaker came from Burnley, where he was born in 1611. and where his father had been master of the school and must therefore have been a conformist. He was educated at Valladolid, and after ordination laboured on the mission from 1638 to 1643, when he was arrested, and lay in Lancaster Castle till his trial. His time there was spent in prayer and in acts of charity to other prisoners." Canon Billington also records that he was a "timid man, and greatly afraid of death", and therefore tempted by those around the gallows who promised him life if he renounced his Catholic faith. He remained firm, however, and, as Billington tells us, "commending his departing soul into the hands of his Saviour, he was despatched."

Blessed John Woodcock
Woodcock's two companions were secular priests, but he was a Franciscan. Canon Billington writes, "Woodcock, in religion Father Martin of St. Felix, was born at Leyland in 1603, the offspring of a mixed marriage; he was brought up as a schismatic or heretic, but after his conversion at the age of twenty, was educated at St. Omers and Rome. He was received into the English Franciscans in 1631. About 1640 he was sent on the English mission, but returned to his convent, to die there as he supposed. In 1643 or 1644 he obtained leave to return to England, but was captured immediately after his arrival in Lancashire, and kept for two years in prison in the castle... Woodcock was specially distinguished by the expressions of thanksgiving with which he heard his sentence."
Posted by Canon Billington at 6:11 am